Jeeping and Snowboarding in NYC 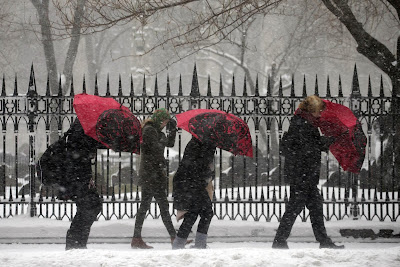 While most people complain every winter about the annual snowstorms, and the sensationalist news media fills up air time by inflating run-of-the-mill snowstorms into horrific once-in-a-lifetime Snowpocalypse events, there are others who realize a little snow is a good thing.  Jeep owners, especially.

And while many Jeep owners live in rural areas and in mountains where a 4-foot blizzard is nothing to write home about since it happens a dozen or more times a year, you'll also find Jeep owners stuck in metropolitan cesspools of whiners where a few inches of snow is all it takes to shut down an entire city.  When Mother Nature does her thing, rather than complain about it a popular New York City YouTuber named Casey Neistat gathers his friends to go out and do a little Urban Snowboarding:


It seems that most people enjoy watching his harmless recreation while the city is "shut down" but as always, a few do-gooders have to call the cops to complain.  Watch to the end of the video to see the NYPD's coolest officer pull them over to say "Someone complained about you so we're just gonna act like we're talking to you . . ."
Posted by rubicon4wheeler at 11:22 AM