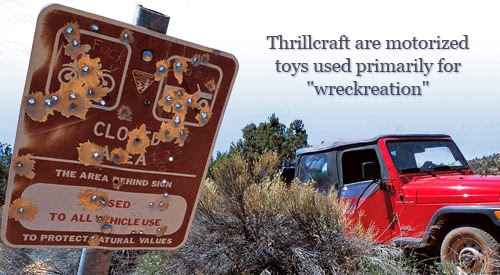 As a nature-lover who enjoys backcountry exploration primarily in a Jeep, I'm far more concerned than most people with the health and protection of the environment.  Most OHV users, whether they drive 4x4s, ride motorcycles, ATVs, mountain bikes, kayaks, hang gliders, JetSkis, snowmobiles, or simply drive their Prius down a dirt road to a picnic area, are also true environmentalists.  The following video, produced by elitist anti-access faux-environmentalists, is a shameful propaganda piece that shows the true colors of the extremist "environmental" organizations.

Exaggerated claims, out-of-context references, junk science, and outright lies make up the bulk of the video and the book they are trying to sell: Thrillcraft: The Environmental Consequences of Motorized Recreation.  While fully exploiting their fabricated stereotype of the hillbilly OHV land abuser to make their point, the editor and publishers of the book just so happen to perfectly fit the "armchair environmentalist" stereotype: rich liberal San Francisco elitist urbanites.  The quotes from the front page of their website summarizes their despicable claims:  "Thrillcraft threaten our national heritage" and "It's time to take back our lands!"


The irony of their claims is that mechanized backcountry exploration is absolutely part of our heritage since the days of the horse-drawn carriage.  Even more ironic is that they want to take away public lands for their own private use.  They conveniently ignore the 5 tenents for the management of our public lands as sent into law by the Multiple-Use Sustained-Yield Act of 1960: "to develop and administer the renewable resources of timber, range, water, recreation and wildlife on the national forests for multiple use and sustained yield of the products and services."

Public rights-of-way for motorized vehicles are protected by laws going all the way back to Revised Statute 2477 (RS2477) in 1866.  Anti-OHV advocates will reject that law as archaic, but numerous subsequent laws including most decisively the Federal Land Management and Policy Act (FLPMA) of 1976 recognize and revalidate those routes and activities.  Both the United States Forest Service and the Bureau of Land Management recognize and preserve backcountry OHV recreation.  We could argue the right to OHV recreation ad infinitum (just as these disputes continue to be heard in courts of law) but the simple fact of the matter is that public lands are for public use, and the problems we're facing originate from anti-OHV crowd's incapability of sharing.

The Thrillcraft book and video show some dramatic images of OHVs and people, but we must remember that these pictures are cherry-picked and used completely out of context to create the most powerful propaganda.  While the vast majority of OHV routes are single- or two-track trails, images of the few designated open-riding areas are used to imply that OHV users ride off-trail and destroy the environment wherever they go.  While the vast majority of OHV users are "average Joes" who come from all walks of life, images of low-class yahoos are used to imply that OHV users are all disrespectful to and dismissive of Mother Nature and societal laws.  The opening image of this blog, which is linked from the Thrillcraft website, illustrates the dishonest link they're making between Jeeping and poor citizenship.  If we're going to follow their lead in making misleading generalizations, here's an example of what kind of person all hikers are like.

Propaganda must be powerful to have any effect, and the anti-OHV organizations have mastered the techniques.  They may be a tiny minority, but self-proclaimed "environmentalists" have succeeded in portraying mechanized recreation as an evil activity to nature-lovers and politicians, and winning a lot of money and influence.  In an effort to show what OHV recreation is really all about, a few organizations have produced their own videos:


OHV users are the largest group of environmentalists, although few will admit to it because of the stigma that the extremists have associated with that word.  OHV users have adopted mechanized recreation as one of many methods by which they access, explore, and enjoy our backcountry.  Recreation and preservation are not mutually-exclusive; to the contrary, I believe that the societal will to protect Mother Nature relies upon getting as many people as possible from all walks of life into the backcountry, having fun, learning about, and gaining an appreciation for it.  The desire to go back will foster the will to protect nature for the future.
Posted by rubicon4wheeler at 9:44 AM