The Wrangler Rubicon is "Freakishly Capable"

After just a short off-road test-drive, Road & Track published a raving review of the Jeep Wrangler Rubicon X.  With so many "cookie cutter" cars and crossover SUVs being reviewed, the Wrangler really stood out as a uniquely fun and capable machine.  As a result, some choice words were used to express the author's enthusiasm for the Jeep:


Jeep has built more than a million JK-generation Wranglers, and people still stare when you come bombing through downtown. It’s hard to blame them. There’s always some beauty to be found in utility, and the Rubicon wasn’t not molded by wind tunnels or corporate groupthink. It was hammered into shape by rock trails and sandy scrambles.


On the road, the Wrangler feels like an old school truck in the best way possible. The soft coil spring suspension and solid axles float and wiggle, and there’s plenty of body roll at every corner. Crossovers have conditioned us to think every machine should drive like a Camry; The Rubicon reminds me that it’s good not everything does.


I quickly realize that like the Porsche 911 and Corvette Stingray, this machine is far more capable than I am behind its wheel.


A light drizzle starts down out of the sky on the ride home. With the side panels back at the house and the glass windows down, I smell the rain and feel the temperature fall long before I see the first drops on the windshield. It’s a perfect moment. A Jeep moment. I put my arm out the window just to feel the rain on my skin. You can keep your laminated glass. I’ll be in the sticks.

It's no wonder why the author proclaimed the Wrangler "freakishly capable" - it offers driving opportunities that no other vehicle does.  You will always find car reviewers who just don't "get" the "Jeep Thing" and will bemoan the fact that the Wrangler doesn't fit in today's homogenized world.  But when an open-minded reviewer gets to experience a real Jeep outside of the city, you'll find praise heaped upon praise.  That's why Jeep has sold over a million Wrangler JKs.

Posted by rubicon4wheeler at 8:57 AM No comments:

The 10 Best Off-Road Vehicles You Can Buy Right Now

In light of the emmasculation of U.S.-market "trucks" over the last 20 years, Popular Mechanics has published a list of the 10 Best Off-Road Vehicles You Can Buy Right Now.  In their words,


Vehicles have gone soft lately as SUVs and pickups have prioritized fuel economy and comfort over all-out off-road capability. For most buyers, that's a good thing. But plenty of truck buyers still enjoy a romp in the mud, and these 10 rides are for them.

Naturally, as the pinnacle of off-the-dealer's-lot vehicular capability, the Jeep Wrangler Rubicon is found at the top of their list:


When a collection of hardcore off-road-duty parts came together in the TJ version of the Jeep Wrangler in 2003, it was as if every four-wheeler’s dream list of components had been built into Jeep’s most capable platform. And for more than a decade since, the Wrangler Rubicon has been the benchmark 4WD SUV.

Today’s Rubicon package adds hardware such as Dana 44 axles, a 4:1 transfer case for easy slow-speed crawling, and a swaybar disconnect system to free up the suspension when the Jeep needs additional suspension flex on the toughest trails.

From the article, it sounds as if the new Wrangler Rubicon Hard Rock Edition is a continuation of the 10th Anniversary Rubicon, with its upgraded bumpers, red tow hooks, and blacked-out trim.
Posted by rubicon4wheeler at 8:38 AM No comments:

American Expedition Vehicles specializes in high-end Jeep accessories and turnkey offroad Jeeps.  They have led a series of Customer Tours in some of the most iconic 4wheeling areas of the United States.  Their latest trip followed the famous Alpine Loop (Engineer Pass, Corkscrew Gulch, Black Bear Pass, Imogene Pass) outside of Ouray, Colorado, and they produced the following video.

Of particular note is the synergy with which offroad recreation and the flora and fauna happily coexist.  Contrary to the anti-access propaganda spewed by the self-proclaimed "environmentalists," Mother Nature is the perfect place for families and their Jeeps to explore.  With 110 million acres of public lands already behind the lock and key of Wilderness Area designation, it's no wonder why we nature-lovers fight so hard to keep the remaining backcountry areas like this still open and accessible to the public:


I've written about AEV's previous Customer Tours to Anza Borrego, The Rubicon Trail, and The Oregon Dunes, but you can view their full collection of videos on their website.
Posted by rubicon4wheeler at 8:20 AM No comments: 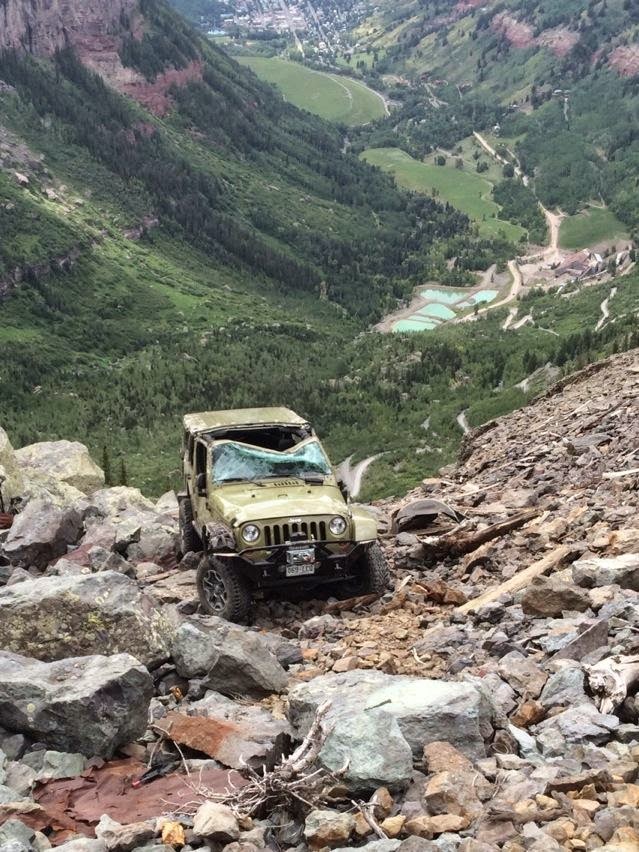 The photo above, taken by Deputy Kirkendoll of Colorado's San Miguel County Sheriff's Department and posted to Sheriff Bill Masters' Twitter account, illustrates the care that must be taken when 4wheeling - especially on treacherous trails like this one.  CBS Denver shared the photo with the following comment:

Sheriff Bill Masters tweeted the photo taken by one of his deputies. No one was injured in the crash. It’s unclear how many times the jeep rolled.

Black Bear Pass is part of Forest Service Road 648, a jeep trail that begins at 11,018 feet at the summit of Red Mountain Pass between Ouray and Silverton. It connects to Telluride.

The pass’ elevation is 12,840, and the road descends via switchbacks above Telluride.

It's amazing that the Wrangler's occupants were not injured.  Had the Jeep's rollover not come to a stop where it did, the precipitous tumble down the cliff surely would have been fatal.  For the experienced driver, Black Bear Pass should be at the very top of your off-road "bucket list."

In-cab video of the rollover has been published to YouTube.  Be advised of the adult language:

Additional photos of the rollover have been published: 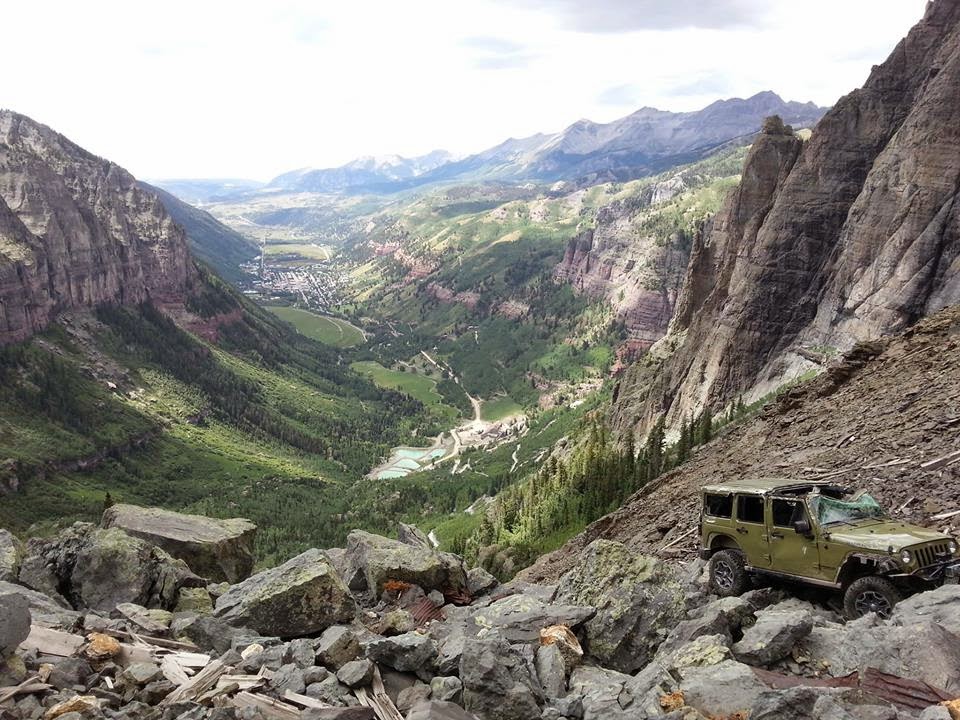 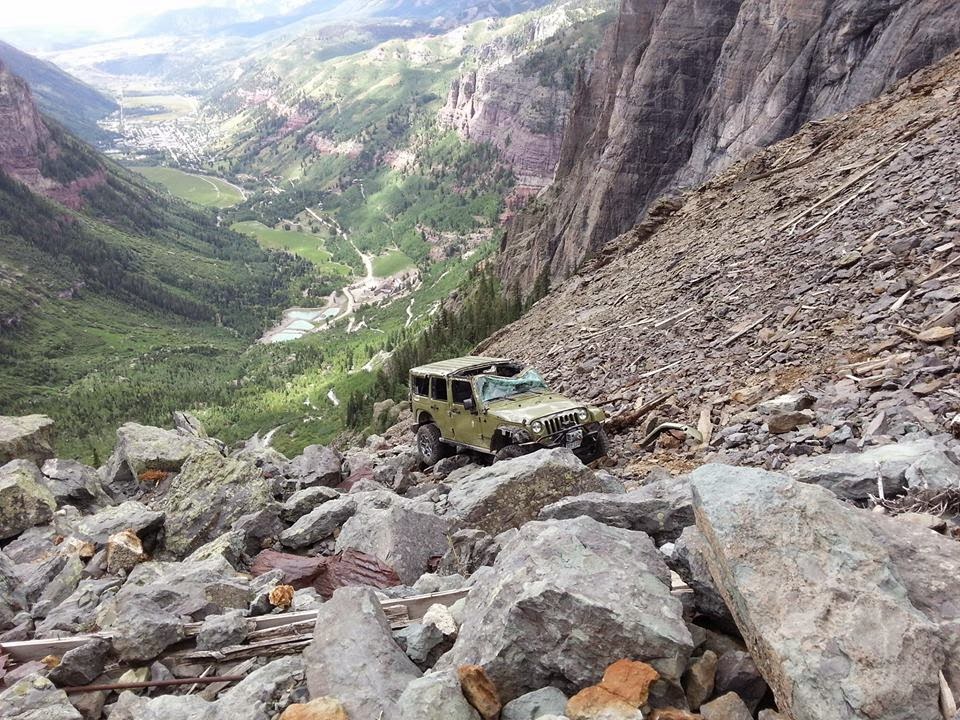 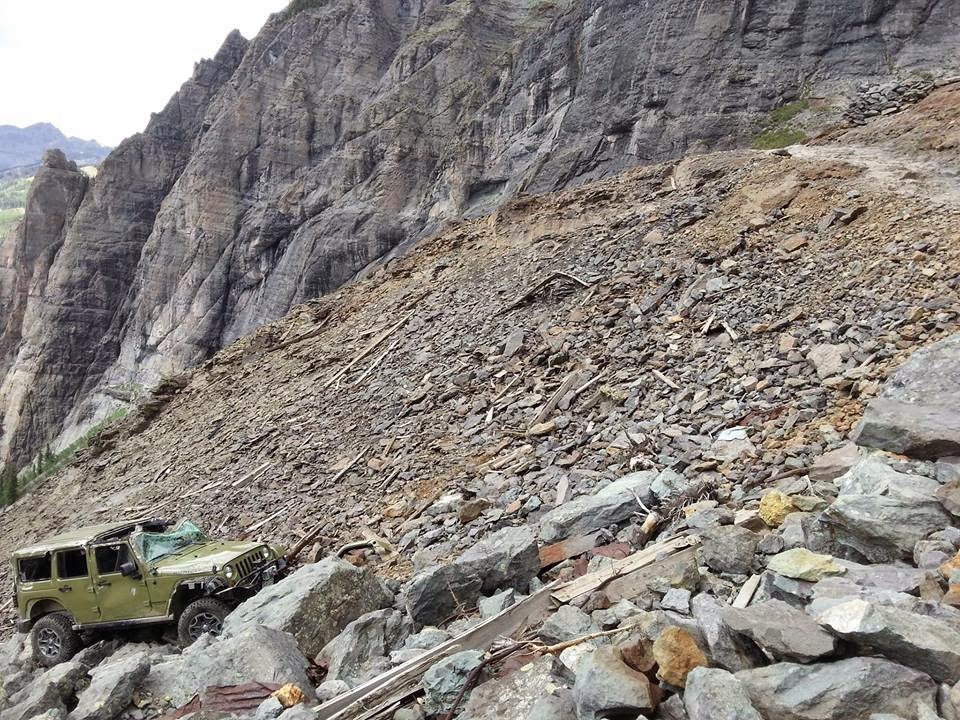 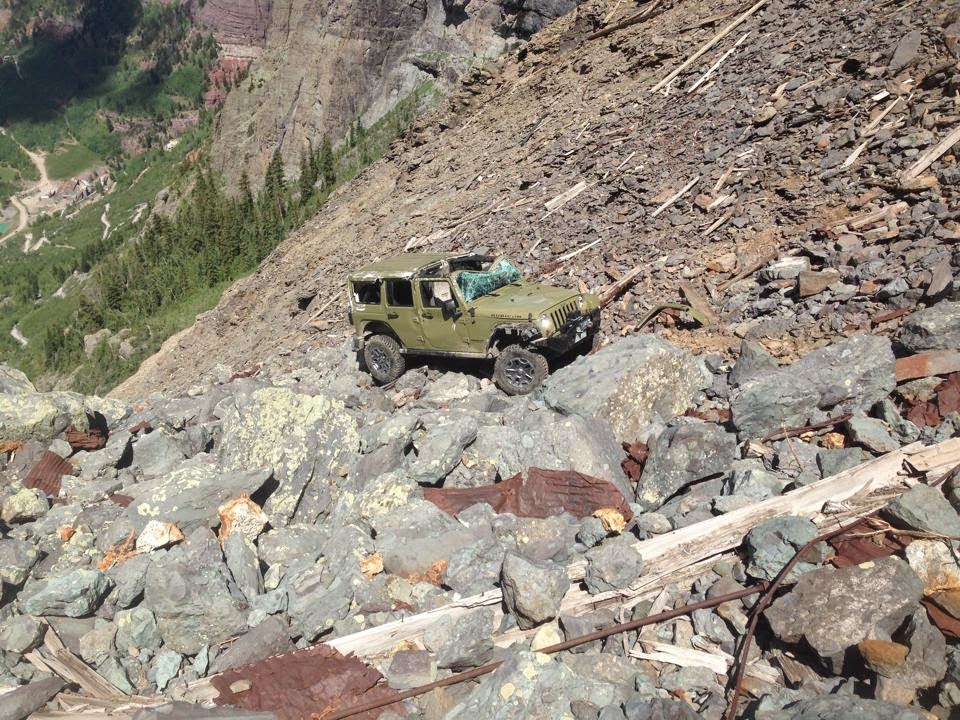 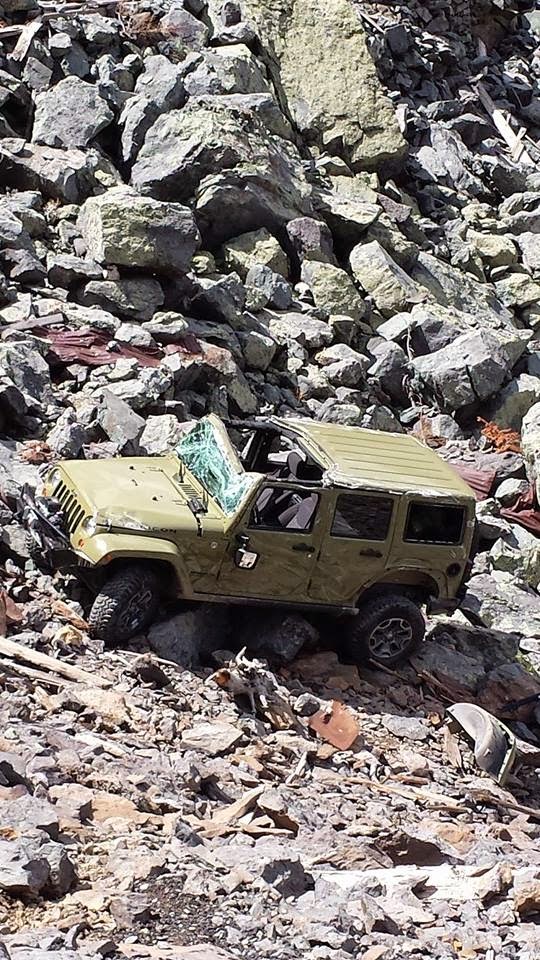