Jeep Wrangler: Proud to be Hated by Consumer Reports

While the automotive press (and especially those who focus on the offroad market) continue to heap praise on the Jeep Wrangler year after year, notoriously out-of-touch and unscrupulous Consumer Reports has rated the 2012 Jeep Wrangler as "the lowest-ranked model in our ratings of over 300 models."  The video review they produced demonstrates their complete dissociation from reality:


They complain about wind noise levels, yet they chose a soft-top Wrangler instead of a hard-top.  They are confused by the dash-mounted window switches and accessible door wiring loom, as if there's a better way to facilitate the Wrangler's unique lift-off doors.  They don't like the width of the Jeep's A-pillars, which provide crucial structural integrity for potential rollovers in extreme terrain.  They criticize its rocky hillclimb capability, yet they chose the most street-oriented version of the Wrangler, with street-biased tires, on slippery wet rocks, and their test driver used an idiotic foot-to-the-floor driving style to minimize traction and maximize dramatic footage.


Jeep can be proud to wear CR's "low" rating however, since a disparaging remark from Consumer Reports more often than not can be seen as highest praise.  Consumer Reports' findings are regularly the polar opposite of industry-specific experts' findings: 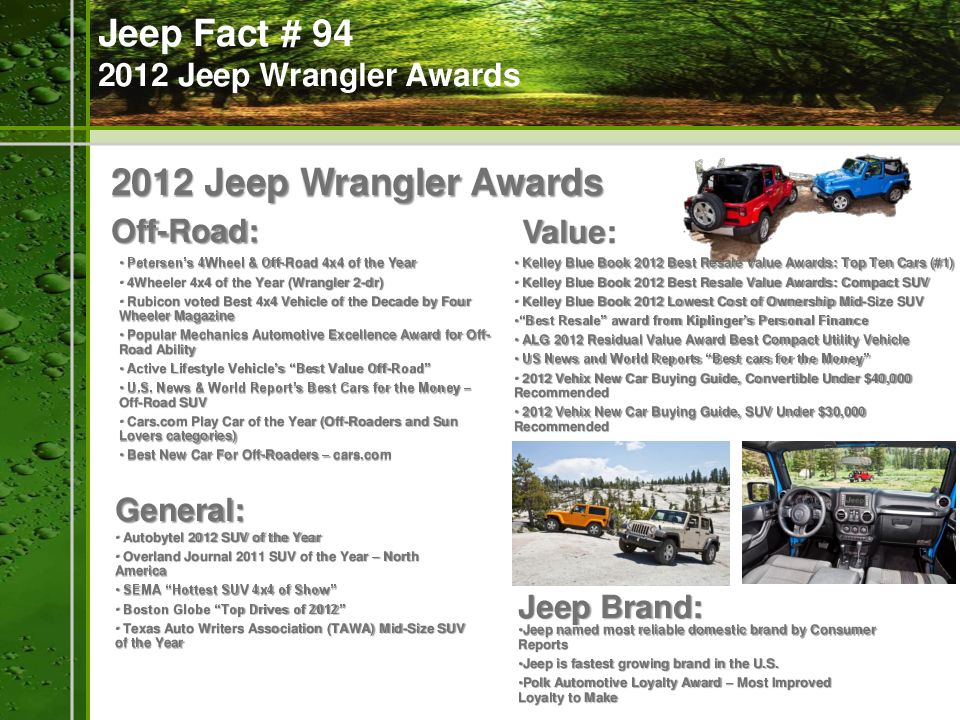 In this case, their criticism of the Wrangler is of the traits that make the Wrangler what it is - indisputably the most capable 4x4 you can buy.  And this isn't the first time Consumer Reports has ranked the JK as bottom of the barrel; back in 2008 when the JK Wrangler was new, they also rated it then as the absolute worst mid-size SUV.  Here is but one Jeep owner's response to that biased report:


And as reported more recently, Consumer Reports has ranked the Wrangler at the top of their Top-10 list of new cars that they claim are the worst value.  Of course, actual Jeep owners will be the first to tell you they love their Jeeps and disagree entirely with Consumer Reports' biased opinions.  After all, how could anyone with any common sense try to compare a hardcore, truck-based offroad vehicle (Wrangler) against a car-based AWD station wagon version of the Corolla (Toyota RAV4) or Civic (Honda CR-V)?  Only Consumer Reports....

But it's clear that Consumer Reports isn't interested in the truth; there always seems to be an agenda behind their stories.  They have gone after several other offroad-biased SUVs in the past, since they are easy targets for magazine-selling sensationalism.  Most famously, they have targeted the 2010 Lexus GX460, 2001 Mitsubishi Montero, 1996 Isuzu Trooper / Acura SLX, and the 1988 Suzuki Samurai:


To put CR's biased reviews into perspective, here's a behind-the-scenes look at how the respected offroad industry experts test 4x4s:


As I've said before, the next time you're looking for information on vehicles, don't allow yourself to be misled by Consumer Reports.  You will be much better served by avoiding misinformed journalists and biased agencies and instead going straight to the industry experts and enthusiasts.
Posted by rubicon4wheeler at 7:47 AM