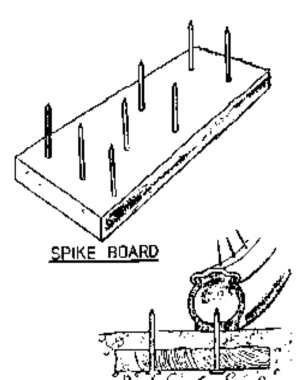 Ecoterrorism is an ongoing tactic used by the anti-access faux-environmentalist groups to discourage legal motorized and equestrian recreation in multiple-use areas.  From burning down ski lodges and vandalizing SUVs on dealership lots to attacking fishing boats and setting crude booby traps in the woods, environazis show no respect for private property and human life.  You can read about their horrific tactics yourself, as found in Earth First!'s Death Manual.

It's usually only the big instances of ecoterrorism that make the news, but little incidents happen all the time.  As someone who partakes in a variety of forms of mechanized recreation that are frequently the focus of ecoterror attacks (4-wheeling, ATVing, motorcycling, mountain biking, river rafting) I run across little-known incidents quite regularly.  Here are just two examples from the last week:

An OHV trail outside of Flagstaff, AZ has been booby-trapped with at least 5 pieces of spiked rebar in an effort to disable vehicles and injure trail users.  From the Arizona Game and Fish Department's Facebook page:

Law Enforcement needs your help! Someone has been purposely placing sharpened rebar on and near forest roads in the Happy Jack area. Spiked pieces of rebar slashed at least eight tires over the weekend. It appears the rebar is being placed in areas frequented by off-highway vehicles (OHV). If you have any info about who may be doing this, contact Forest Service law enforcement at 928-527-3511.

“The end of the rebar has been flattened and sharpened to a point and the exposed point has been painted to blend in with the road surface,” said Mogollon Rim District Ranger Linda Wadleigh. “The objects pose a serious threat to everyone, and that doesn’t just mean people recreating on a motorcycle or OHV, it includes people walking, hiking and even wildlife. We are taking this very seriously and asking the public to keep an eye out and report suspicious activity in the area.”


Ecoterrorism is a real problem with real victims.  In this week's second news story, outdoorsman Shane Hamilton and his family are the innocent victims of malicious intent to murder.  Instead of trail spikes, Shane was killed by a cable or piano wire strung between trees across an ATV trail, another common booby trap that the anti-access faux-environmentalists commonly employ.  From their Visit Key West Facebook page:


Karrissa Hamilton . . .  is part of the team that brings you this page, and the website associated with it.

She and her husband Shane were on vacation with their two children over #July4th weekend in Bryson City, Swain County, North Carolina. They had JUST arrived at their lodge that day. Shane took their 10 year old son to go ATV riding (they chose the lodge singly on their ability to be able to do this, so this was permitted), but something terrible happened. Someone with malicious intent had strung a metal cable across one of the trails. Shane did not see it. Thankfully, their son, who was riding on the back behind him, was not injured.

Shane, however, did not make it. He died from his injuries.

To add further insult to injury, we are told that the Swain County Sheriff's Office will not take any action, and will conduct no investigation. The property owner is being uncooperative, and whatever bubba system they have in place is keeping even the very STORY of the incident at bay. No news articles, no coverage, nothing.

Besides the devastating loss of her one true love, with whom she has been since they were high-school sweethearts, Karrissa must now deal with the financial and legal struggles that come with an event like this.

The "environmental" movement is a good cause, but when crazy activists with a malicious agenda use it as personal justification for injuring and murdering innocent people, it hurts their cause even more so than the general anti-mechanized access movement does.  For people who believe our natural resources should be protected FOR public enjoyment rather than FROM the public, the Blue Ribbon Coalition is the world's premiere environmentalist organization.
Posted by rubicon4wheeler at 1:50 PM