The Story of "Stomper" The Rescue Rubicon 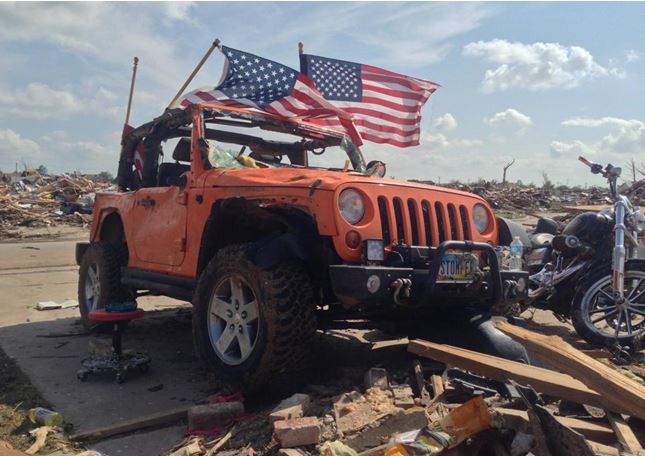 A silver lining has emerged from the black cloud of the devastating tornado that destroyed Moore, Oklahoma on May 20, 2013.  The story of Bryan Hutton and his 2012 Jeep Wrangler Rubicon "Stomper" begins with them leaving their home on Ohio to visit family in Oklahoma.

They got caught in the tornado's path.  Their Jeep was locked in the garage while the family hid in their storm cellar.  Once they emerged after the tornado passed, they found nothing left of their neighborhood.  The Jeep was buried in what was left of the house.

Hutton started checking other homes for survivors and soon realized that the Jeep could be very useful in rescuing people from the rubble - if it could start up and drive.  He dug through the rubble and was able to get the driver’s door open just enough that he could reach in and push the clutch pedal in with his hand and then turn on the ignition.  The Rubicon fired right up.  He reached in and jerked the shifter into reverse.  The Rubi begin to dig and claw its way backwards out of the debris and out of the garage.  Once it cleared the debris he was able to get it stopped in the driveway.

He cleared the wood and other debris out of the Jeep and drove up and down the neighborhood on three flat tires, offering help in any way he could.  He used the Jeep's Warn VR8000 winch numerous times to uncover people trapped under debris.  He transported injured people to medical personnel.  He delivered food, water, clothing, and other supplies to people.

The hero Jeep, although a total loss as far as insurance is concerned, is not heading to the recyclers.  Inspired by Bryan's efforts and the never-say-die attitude of his Jeep, numerous Jeep aftermarket  companies are contributing to its rebuild, including ARB, Reid Racing, Warn, TeraFlex, Rock Krawler, MetalCloak, Rock-Slide Engineering, Rugged Ridge, DiabloSport, Asfir4x4, TrekArmor, GR8TOPS, Genesis Offroad, RCV Performance, Factor 55, TrailReady, Burnsville Offroad, Race Car Dynamics, and others.  The rebuild is being performed by Crocker Off Road Performance in Phoenix, AZ.

You can follow the story and connect with everyone involved on the Jeep's Facebook page.  Several news outlets are also covering this story, including Jalopnik, Truck Trend, Highline Autos, and C4x4 Magazine.


Here's a great video from RightThisMinute.

The 4x4 Podcast discussed the whole story of Stomper.

Stomper even inspired a Jeep commercial:

Posted by rubicon4wheeler at 9:50 AM