There's no such thing as a perfect vehicle.  The Jeep Wrangler JK is about as close as you'll ever find, but even it has its shortcomings.  For instance, its suspension is too low.  It doesn't come from the factory with 35-inch-tall tires.  And its rubber hood catches allow the hood to flutter in a strong headwind.

Most serious Jeep owners install a suspension lift kit and bigger tires, but not enough of them upgrade their hood latches.  When new, the original rubber hood latches work fine, but as the rubber dries out and they lose their elasticity with age, they can allow hood flutter when traveling at a high rate of speed.  Even at normal highway speeds, a strong headwind or an oncoming truck can blast enough wind through the Jeep's radiator to pressurize the underhood engine compartment and force the hood to lift.


It may be disconcerting to watch the hood bounce up and down with every big gust of headwind, but the hood isn't going to fly open all of a sudden; not only would both rubber hood catches need to break, but the central metal hood latch would also have to fail.  But even so, I wanted to upgrade my Jeep's hood catches to solve this annoyance.

There are a few aftermarket upgrades available for the JK, TJ, and earlier Jeeps.  The most popular is the Daystar Hood Wranglers.  These are a pair of polyurethane replacement straps for the original rubber straps.  They don't stretch as much as the rubber ones do, and the polyurethane is reported to better withstand weather and ultraviolet breakdown over the years.  They're very easy to install and at only $25 a set, it would be silly to replace your worn out old rubber ones with a set of fresh rubber ones from your local Jeep dealership.

The downside to Daystar's Hood Wranglers is that they still utilize the OEM plastic latch, mount, and buckle pieces.  Since plastic breaks down and becomes brittle in the sun, and also succumbs to general fatigue, I wanted to find a better option.  After lots of research, I chose the Rugged Ridge XHD Hood Catches which dwarf the OEM hood catches, are proven to be a huge upgrade in strength and durability, and are surprisingly affordable. 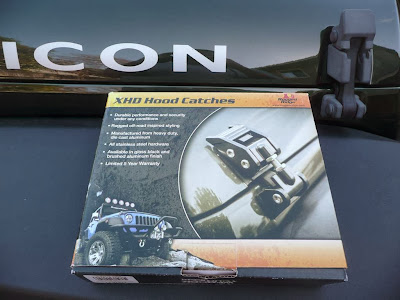 Every part of these extra-heavy-duty hood catches is metal.  Rather than simply utilizing a flexible material for the strap, these hood catches have a fully adjustable turnbuckle with jam nuts to allow simple adjustment and prevent them from coming loose.  The billet aluminum hardware is powdercoated black, but they are also available in silver, which not only doesn't match anything on the Jeep but are also more expensive.


Everything you need is included in the box:


Installation is very easy - remove the original hood catches and install the XHD Hood Catches in their place:

The bottom bracket has one supplied nut, countersunk bolt, and washer.  It utilizes two alignment pins, just like the original bracket.  Getting a 1/4-inch ratchet with a 1/2-inch deep socket behind the fender is the trickiest part of the entire installation.

The hood-mounted upper bracket is easily removed and replaced since the two 10mm nuts are readily accessible on the underside of the hood.  New bolts, washers, and nuts are supplied in the Rugged Ridge kit.

After loosening the jam nuts, rotating the buckle to adjust its length and tension, and retightening the jam nuts, the new Rugged Ridge XHD Hood Catches secure the hood down with a solid, reassuring clunk.  There is no way the billet aluminum and stainless steel hardware will stretch or crack like the original rubber and plastic parts do, and hood flutter is a thing of the past.  The oversize and attractively-styled XHD Hood Catches give the Jeep a subtle yet powerful visual upgrade that won't look weathered and worn out after a few years in the sun. 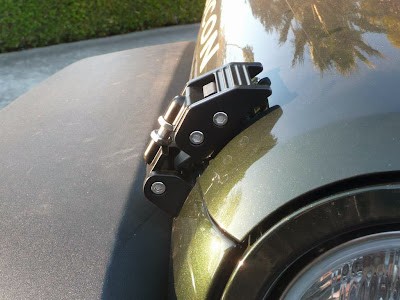 Rugged Ridge has a lot of dealers so you shouldn't have any trouble sourcing this kit, but pricing varies considerably.  The kit retails for $130.99 but the best price I found is on Amazon.com where you can also read numerous glowing reviews from other Jeep owners.  I paid around $78.00 and I consider it money well spent.
Posted by rubicon4wheeler at 5:57 PM