Could the New Wrangler be Emasculated with Independent Suspension?


Automotive News has rocked the 4x4 industry with a brief article in which they provided clues to the future (2016?) revision of the Jeep Wrangler.  They interviewed Mike Manley, the Jeep brand's head honcho, and he provided no guarantee that the next-generation Wrangler would still be equipped with the coveted solid-axle drivetrain.  The Jeep world has been turned on its head with this possibility.

Simply put, a Jeep Wrangler without a proper pair of solid axles is sacriligious.

With the exception of the Mercedes-Benz Geländewagen, every other dual-solid-axle 4x4 has been abandoned by its manufacturer in the United States.  While marketing folks will attribute this sad trend to the quest for a smoother ride and better handling on-road, everyone knows that the Wrangler's popularity is due to the fact that it has always bucked this trend.  Jeep understands this fact better than anyone after having sold 194,142 Wranglers in 2012, set an all-time sales record in 2012, and based on an 11% rise in sales through September, 2013, they're projected to sell roughly 220,000 Wranglers in 2013.  Earlier this year they celebrated the production of the 1,000,000th JK Wrangler.  Clearly, there are a staggering number of people who don't want a sissy faux-by-four:

Despite what the marketing department claims, the real reason for the rumored downgrade to independent suspension is the government's meddling in the free market.  Emissions standards, crash standards, and especially Corporate Average Fuel Economy standards are stripping the market of design variance; cookie-cutter vehicles with mostly cosmetic differences are the end result.  That's how we've wound up with the ghastly new 2014 Jeep Cherokee, which for all intents and purposes is little more than a tall-riding station wagon variant of the Dodge Dart and Alfa Romeo Giulietta with optional all-wheel-drive; it's a near carbon copy of the latest RAV4, CR-V, Sportage, CX-5, Santa Fe, and Escape's design and engineering.  No longer is the Cherokee a tough, family-oriented all-terrain vehicle that shared its guts with the Wrangler and J-series trucks; this new faux-Jeep was designed around fuel economy and other government-mandated standards, rather than what Jeep's customer base actually wants.  Sure, Jeep will sell a decent number of them, but never in the numbers that its predecessor, the XJ Cherokee ever did.

Don't get me wrong - there's nothing wrong with fully-independent suspension under crossover vehicles; the crossover segment has exploded in popularity since they provide a smarter alternative to the older truck-based SUVs that used to be so popular among soccer moms.  This popularity is why nearly every car manufacturer has jumped on that bandwagon.  The distinction here is that Jeep's customer base is different than that of all the wanna-be's.  Jeeps have maintained their popularity because they have (until recently) always been an alternative to these faux-by-fours.  Not everyone buys a Wrangler because they plan to go rockcrawling, but everyone buys a Wrangler because it still has that capability.  Without that capability, and without the endorsement of the offroad crowd, the Wrangler will lose its reputation.  Without a standout reputation, Jeep's popularity within the mallcrawler segment will also wane.  Just look at the cold reception the 2014 Cherokee has received, in spite of being the most-capable of all the crossovers; the offroad crowd is disgusted by its hackjob AWD system, and nearly everyone dislikes its Gilbert Gottfried-inspired front-end:

Jeep has a uniquely devoted fan base which is the envy of every car manufacturer.  The Jeep brand is absolutely iconic, and Fiat/Chrysler are idiotic for threatening to mess with this perfect formula.  Remember New Coke?  Or Crystal Pepsi?  Those marketing failures were expensive lessons to corporate bigwigs who are too far detached from the end-users of their iconic products.  Two generations of the independent-suspension Liberty never matched the sales of the venerable solid-axle XJ Cherokee that they replaced, and the new Cherokee is even further emasculated.  If Jeep strips the upcoming replacement for the Wrangler of the solid axles that define it, it will suffer a similar fate.  Just look at some examples of the mocking the Cherokee has been receiving: 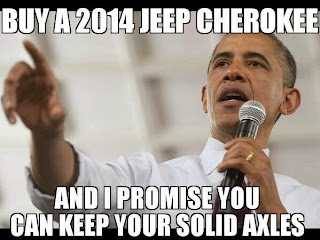 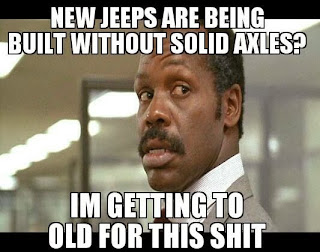 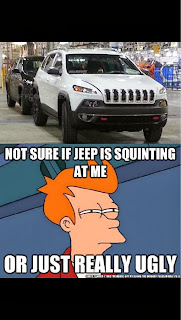 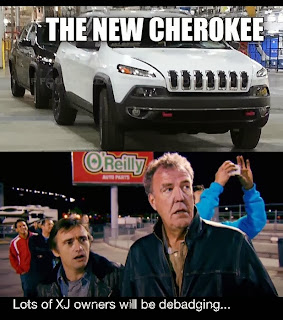 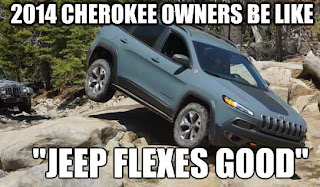 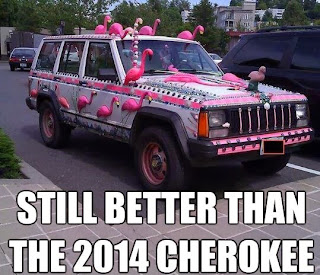 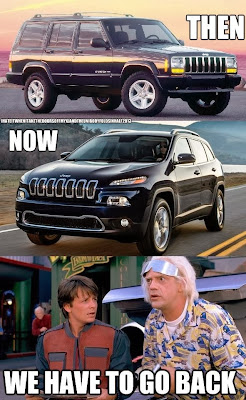 Does Jeep really want to subject their flagship vehicle to this sort of mocking?  Jeep's engineers need to focus on retaining the heavy-duty, off-road-centric qualities that define the Wrangler (and the Jeep brand in general, while they're at it) while designing a vehicle that meets current and the projected future mandates that the government dictates.  Jeep managed to accomplish this with the JK Wrangler when the previous-generation TJ Wrangler could no longer meet crash standards and emissions standards.  Let's hope Fiat/Chrysler's engineers don't take the easy way out by stripping the JK's replacement of all that defines the Wrangler; it's absolutely possible to design a more fuel-efficient Wrangler that retains the requisite pair of solid axles, strong body-on-frame construction, and open-top architecture.  For instance, removable plastic air dams beneath the bumper and around the suspension components, along with a return to unlocking front hubs can return big gains in fuel economy without compromising the vehicle's core attributes or adding significantly to the vehicle's cost.  A turbodiesel or HCCI engine could further boost fuel economy by another 15-20%, albeit at greater expense.  But that's nothing new when dealing with government intrusion.

Fiat/Chrysler's product planners might think I'm crazy, but I'm certainly not alone in my opinion.  The Jeep experts at the various offroad 4x4 magazines, Expedition Portal, and Autoblog weighed in with their own opinions.  If enough people make their opinions heard, maybe Jeep's engineers will do everything they can to retain the public's expectations of the iconic Jeep 4x4.
Posted by rubicon4wheeler at 9:44 AM