The Rubicon Trail's Little Sluice Box Has Been Destroyed


As of yesterday, September 28, 2012, the iconic, most photographed, and toughest obstacle on the Rubicon Trail - the Little Sluice Box - has been destroyed.  Not by an act of Mother Nature.  Not by faux environmentalists.  And certainly not by the offroaders who loved and cherished it.

Little Sluice was destroyed by the El Dorado County Board of Supervisors. 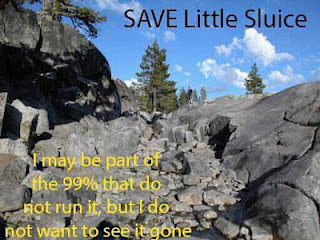 The latest issue of JPFreek Adventure Magazine is available to read for free!  You can read about the PA All Breeds Jeep Show, read reviews of various overland adventure gear & how to best pack it, proper techniques with tow/recovery straps, tours of Mount Whitney, Arizona, and the Czech Republic, and read about the start of a CJ buildup.  Check it out here.
Posted by rubicon4wheeler at 3:48 PM No comments:

A More Fuel-Efficient Wrangler is in the Works

NBC News is reporting on some of Jeep's future prospects after a recent interview with the Wrangler's Chief Engineer, Tony Petit.  The government's relentless attempt to legislate the laws of physics mandates a new Corporate Average Fuel Economy number of 54.5mpg by the 2025, so a big part of the Wrangler's advancement will center on increasing fuel efficiency.

Jeep loyalists are understandably concerned with what this means for their specialized, iconic Jeeps and the capabilities for which they buy their Wranglers.  Thankfully, the future sounds bright; the best indication is this quote from the interview:


Does that mean vehicles like the Jeep Wrangler, an off-roader that traces its roots to the original World War II Army Jeep, will turn into a glorified economy car?  No way, says Wrangler chief engineer Tony Petit.

“We will not water down our icon,” pledged the man who will oversee development of the next generation Wrangler in coming years. So that means it will not be forced into becoming a “Jeep-styled” economy car, but will retain the genuine off-road capability the brand’s enthusiasts expect.

Jeep’s regular benchmark is the vehicle’s ability to traverse The Rubicon Trail near Lake Tahoe, Calif., so if the future greener Wrangler achieves that, fans should be satisfied.

We're all hoping and praying that strong solid axles front and rear remain the core component around which the rest of the Jeep is designed!

As technology continues to advance, smaller, more fuel-efficient engines are better able to provide the horsepower and torque necessary to meet consumer demand and engineering requirements.  As mentioned elsewhere in the interview, a turbodiesel would be the perfect solution if it wasn't for the EPA's (and particular the CARB's) overly demanding requirements that require prohibitively expensive emissions control equipment that not only add thousands to a vehicle's bottom line, but also detract from the power, fuel efficiency, and reliability of the engine while increasing operating costs, maintenance requirements, and service/repair intervals.  Until the government restrains their policies that stifle innovation in diesel technology, a direct-injected and turbocharged Multiair 4-cylinder gasoline engine is the most likely candidate, with a Pentastar-family V6 likely to continue to be optional.

The following video is Mr. Petit's press introduction a year ago to the 2012 Jeep Wrangler's midcycle update:

Posted by rubicon4wheeler at 2:22 PM No comments:

Motor Trend Magazine's video series and blog Wide Open Throttle put together a fun video hosted by Jessi Lang in which she met up with Four Wheeler Magazine's David Hamilton at Pismo Beach for some fun in the Oceano Dunes SVRA in a Jeep Wrangler Unlimited Rubicon:

Posted by rubicon4wheeler at 11:09 AM No comments: 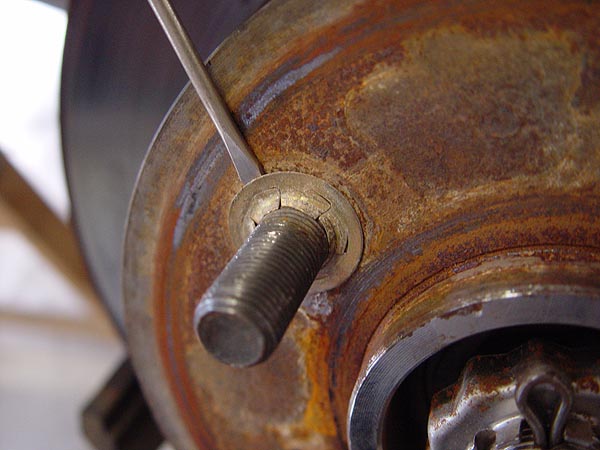 Many people have seen the brake rotor retainer clips on their Jeep's wheel studs, but few know what purpose they serve or what problems they can cause when aftermarket wheels are installed.

The answer to the first part of the question is that they're installed at the factory to secure the brake rotors in place as the Jeep moves down the assembly line, since the wheels are one of the very last components to be installed.

The answer to the second part of the question is a bit more involved.  You will notice that the backside of the original Jeep wheels have an enlarged opening that accommodates these clips and allows the wheels to seat flush against the brake rotors.  The Spidertrax Wheel Spacers I'm using on my Jeep also accommodate these retainer clips, but most aftermarket wheels do not.

If these retainer clips prevent your aftermarket wheels from seating flush against the brake rotor, your Jeep may experience wheel vibration, irregular tire wear, "death wobble," or even a complete separation of the wheel and tire from the vehicle!

Teraflex put together this short video to help illustrate the issues with these retainer clips:


To summarize, you do not need to keep these brake rotor retainer clips; once your Jeep has left the factory they serve no purpose, and can in fact cause substantial problems if you install aftermarket wheels.
Posted by rubicon4wheeler at 9:23 AM 2 comments: