Environmental Zealotry Out of Control 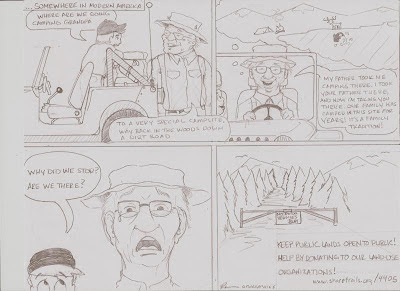 The Mountain Democrat newspaper out of Placerville, California recently published a letter to the editor regarding the recent heartbreaking closure of public trails throughout Eldorado National Forest that I mentioned in a previous blog entry.  This issue was also recently discussed in the Lake Tahoe News.

To say that the innocent, nature-loving general public is upset about these thefts of their right to recreate on their public lands would be a gross understatement.


Outdoors recreation advocates have known about this most recent closure since it was dictated with the stroke of a pen by a liberal activist judge months ago.  Now that summer has begun, the snow has melted, and the kids have gotten out of school on summer break, the average forest user is only just now becoming aware of the problem as they head up into the mountains that their families have been visiting for generations.  They're all getting a big surprise: 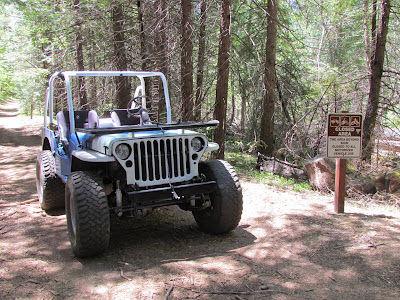 It doesn't matter if you're a camper, a fisherman, a kayaker, a mountain biker, a picnicker, a bird watcher, or a backcountry OHV explorer - you've been locked out of your Forest.  The cancellation of the Lake Tahoe Hi-Lo's 4WD Club Deer Valley Poker Run - an annual family club event that's been held for nearly a quarter of a century - is one of countless examples of nature-lovers who are now locked out of Eldorado National Forest.

Congressman Tom McClintock (R-California, 4th District) has brought this growing problem to national attention before, but the continual theft of public rights-of-way on public lands continues its relentless march towards de facto Wilderness:


Here's a list of the trails in this latest round of closures.

Upset?  You can thank this witch from Georgetown, California who is the major instigator of these problems in Eldorado National Forest:

If you're getting tired of seeing Karen Scumbag and her anti-access, faux-environmentalist organizations successfully litigating the government into taking away YOUR rights to YOUR public lands that YOUR tax dollars are supposed to go towards management for YOUR responsible recreation, then I highly recommend contributing to the pro-access environmentalist organization BlueRibbon Coalition as I discussed in a previous blog post.  They're fighting to keep public lands open to EVERYONE every single day, but they can't succeed without your support.

I've reprinted the Mountain Democrat letter here in case the link expires or the site goes down, but it's worth visiting the link to the newspaper's site to view the reader's comments:

Environmental zealotry out of control
EDITOR:

Imagine … Dad is driving up this summer to take the family to its favorite spot in the Eldorado National Forest, the truck is loaded up with camping gear and bicycles and fishing poles, just like they have done every so often to enjoy the outdoors and get away from the day-to-day grind.

They find the trail they are looking for and stop. Dad and mom are looking at each other with confusion and dismay. There, in the beginning of the trail is a marker saying the trail is closed. How can this be, they wonder? Sad to say, they were not aware that their favorite trail and 41 others were closed by a lawsuit brought on by the Center for Sierra Nevada Conservation …

So they turn around and have to go to some place not so desolate and share their camping experience with hundreds of other campers who have no choice now but to co-mingle their vacation with other strangers. This is going to be one of many different scenarios that will be played out this summer and fall and maybe next summer as well. All because of some environmental zealots with an agenda to keep all OHV travel out of the forest.

The Center for Sierra Nevada Conservation is headed up by Karen Schambach, who of course praises the court's decision in her favor to close these trails. It is she that brought forth this lawsuit against the Eldorado National Forest because some of the roads and trails are in the vicinity of meadows which may possibly be habitats for the Red Legged Frog.

As I researched Wikipedia about this sacred frog, I discovered that it’s primary habitats are in coastal mountain ranges and that they really do not live above 1,200 meters — about 3,940 feet of elevation. Oddly, however, many of these trails run above that elevation. But that seems to be a minor point to Ms. Schambach's groups (she is also part of Center for Bio Diversity and Public Employees for Environmental Responsibility).

Skewing facts does not bother these groups (apparently the judge in the case seems to be unconcerned as well) so long as they achieve their goal of totally eliminating OHV travel. Whether it be claiming people are running over Golden Trout on the Rubicon trail stream crossings or inflating the numbers of people using the trail or saving some nefarious froggy breeding ground, the goal of these groups is clear.

Now, in the interim, closing 42 trails in the forest has created a gauntlet of sorts. In that other trails in the area will see more activity, which may increase erosion and therefore need more maintenance. Unfortunately the USFS is stretched fairly thin these days in budget (petty lawsuits do not help either) and it is up to volunteers such as Friends of Eldorado Forest and Friends of the Rubicon to pick up the slack.

Yet our actions on the ground cannot alone counter her lawsuit. Enter Blue Ribbon Coalition.

BRC has been helping to keep trail access open for over 30 years and quite successfully.

They have been trying to find a positive plan that all sides (USFS and Center for Sierra Nevada Conservation) can agree on. Unfortunately though, CSNC wants all or nothing and sees no alternative to any problem save for closing access. However, as I stated earlier, they cannot win by using half truths and fabrications. BRC is familiar with these tactics and feel that truth will prevail. Sadly though for now, the court has ordered a closure pending further review and information from the USFS.

It is sad that these groups (CSNC and CBD) can give little ground and can only litigate. Never have I seen or heard of Ms. Schambach or any of her groups do any actual work on these trails. I guess the mindset of these environmental zealots can be summed up from a recent interview of Ms. Schambach’s in the Sacramento Bee:

"I guess I used to be one of those people who wish the sport would just disappear. Now, I see the sport just needs to be managed."

I beg to differ Ms. Shambach, it is you and yours that need to now be managed …

Posted by rubicon4wheeler at 10:42 AM