Jeep recently updated their website with a great pictorial history of their vehicles, model-by-model from the original prototype Army Jeep all the way through today's Grand Cherokee.

They have published dozens of great photos along with a good read to go with each vehicle, but the following are a few of my favorites, which show my JK's direct lineage:

There are countless other Jeeps on the site, including the 70's J-Series Honcho, the unique FC-series Forward Control, the swingin' Jeepster Commando, and the grand-daddy of the modern 4-wheel-drive SUV, the Willy's Wagon.  Take some time to see a bunch of your old favorites and learn something new about Jeep's history!
Posted by rubicon4wheeler at 9:31 PM No comments:

Overlanding is a Cheap Vacation

I ran across an article on the Meet Plan Go! blog entitled Overlanding Can Be a Cost-Effective Way to Have an Extended Career Break Adventure and thought this would be a great read for Jeepers and potential Jeep (or other brands of 4x4) owners. While not many of us Americans get extended vacations like most of the civilized world does, that shouldn't keep us from getting outdoors and exploring our backcountry.

I've always found that my 4x4-based camping trips to be the single most relaxing, rejuvenating, and refreshing vacations.  I enjoy lots of different outdoors activities when I'm off from work, but I never experience more or see more than when I'm on one of my overlanding trips.

Overlanding (or simply vehicle-based backcountry exploration) doesn't require lots of fancy equipment, and there's no "right" or "wrong" way to do it.  You make it whatever you want it to be.  You can gather a huge assortment of ideas, from bare-bones to ultra-high-dollar options, along with learning from the opinions and experiences of other overlanders and vendors at the annual Overland Expo.  This year's Overland Expo will be held outside of Flagstaff, Arizona from May 18-20, 2012 and should be the biggest event yet.

Here's a teaser for this year's Expo:

Posted by rubicon4wheeler at 4:44 PM 3 comments:

After decades of fighting to keep our public lands open to the public, Eldorado National Forest is now CLOSED - the first of who-knows-how-many-other National Forests that will surely also wind up closed.  The wonders of this scene are about to be relegated to the history books:

Unless we fight NOW and fight HARD, we have already lost this long war of attrition against our taxpayer-funded land managers and liberal-funded "environmentalists."

Really?  Is the problem really this severe, or am I simply being melodramatic?

It's for real, folks.  Take a look at the list of closed trails at the end of this post.  How could anyone in their right mind think that the family in the above photo is harming the environment and should be locked out of Eldorado National Forest?

Pirate4x4's Land Use Forum has several long discussions in which the bigwigs in the fight to keep your public lands open are obviously disappointed, flustered, and disheartened, and are working to develop a solution to this problem before it's too late.  I think this article from the Lake Tahoe News does a great job of illustrating the disservice to the American public, and the reader comments show how far out in left field the anti-access crowd truly is.

I'm not a fortune teller, but I think (I HOPE!) that this theft of the last remaining public forest lands in California's El Dorado County may finally be the straw that's broken the camel's back.  Not only is the general public getting sick and tired of these system-wide land closures and the wasted tax dollars, but the U.S. Forest Service and the true science-based environmentalists are too.

Is there anything you and I can do to help preserve these public lands FOR the public instead of FROM the public?

Right now, the only sure thing is to join and support BlueRibbon Coalition.  They are taking the lead in this fight, along with Cal4Wheel, UFWDA, AMA, and other pro-access environmentalist organizations.

Read more »
Posted by rubicon4wheeler at 10:08 AM No comments:

I wasn't able to attend Easter Jeep Safari 2012 in Moab, Utah this year, so I've been enjoying the 4-wheeling vicariously through the videos people have posted on YouTube.  Here are a few of my favorites:


Posted by rubicon4wheeler at 8:29 AM No comments:

Email ThisBlogThis!Share to TwitterShare to FacebookShare to Pinterest
Labels: videos

Expedition Portal is one of my favorite websites; it is the online counterpart to the terrific 4x4 magazine Overland Journal.  They have a fantastic discussion forum that covers a broader range of off-road backcountry equipment and vehicle sections than any other website.  Definitely worth checking out.

ExPo recently published an article that discusses the fact that the 2007+ Jeep Wrangler Unlimited is the new Land Rover Defender.  Heresy?  Perhaps not, as author Matthew Scott argues.

Land Rover isn't the only legendary marque that has abandoned its roots: the Toyota Land Cruiser, Nissan Patrol, and Suzuki Samurai all have well-earned reputations in the furthest reaches of the globe.  Each of these vehicles has either been discontinued or emasculated with independent suspension and limited off-road durability.

I have always been a huge fan of the Defender, and while I don't think anyone but Land Rover could ever produce a proper replacement for it, it's indisputable that the Wrangler Unlimited has supplanted the Defender as the top choice for overland-style 4wheeling.  It's unfortunate that Land Rover doesn't appear to have any interest in continuing the solid-axle, purpose-built Defender, but we are all lucky that Jeep saw it fit to expand the Wrangler's offerings to fill this abandoned niche.

It's no wonder that Jeep's Wrangler sales have continued to climb in spite of rising fuel prices; it is essentially the only vehicle left that can meet the needs of the true off-roaders crowd.  Focus groups and political pressure have convinced all other 4x4 manufacturers that offroad-biased SUVs aren't what they should be manufacturing, but consumers have spoken: durable solid-axle 4x4s still serve as strong a need as ever.

Motor Trend Reviews the XPLORE JK at King of the Hammers

Motor Trend is one of the top automotive magazines in the world, but they typically focus on road cars and street/track performance.  Therefore, I found their article on their experience with the 2012 XPLORE Adventure Series Jeep Rubicon Unlimited to be an interesting perspective.

I'm rather disappointed that I did not get see this XPLORE JK in person since I also attended the King of the Hammers race, but I suppose finding one particular vehicle out of thousands out there in the desert is simply a matter of luck.
Posted by rubicon4wheeler at 9:01 AM 1 comment:

The April 2012 issue of JPFreek Adventure Magazine is out!  You can read it for free by clicking here.  This is a great issue that covers the King of the Hammers race, camping/4wheeling gear reviews, Icelandic and Arctic Jeep adventures, and the VWerks JK8 Red Jacket Jeep that Jay Leno and the L.A. Times have featured.

Posted by rubicon4wheeler at 1:51 PM No comments:

One thing that people never seem to be able to agree upon is the best pressure to which your tires should be aired-down for maximum off-road performance.  The truth of the matter is that there's no single answer because every vehicle is a different weight, every tire has different properties, and every terrain has a different sweet spot.  You need to determine for yourself through experimentation what works best for your vehicle on any given trail.

I've gathered a few articles together to help you learn what you need to know to determine the right baseline pressures to experiment.

Expedition Portal has just published a great tech article on airing down your tires for off-road use, with some tire footprint measurements and analysis.

Rockcrawler shares their thoughts in this article.

Warn shares their thoughts on their blog.

I first read about the Forest Service's shameful new guidebook entitled "A Comprehensive Framework for Off-Highway Vehicle Trail Management" on Don Amador's terrific land-use blog.  He wrote a thorough review of the guidebook and later commented on increasing public outrage surrounding this scandal.  I was appalled to read about this guidebook, another blatant example of the government burning through our tax dollars and conspiring with the anti-access "environmentalist" organization named Wildlands Center for Preventing Roads (Wildlands CPR) to lock the vast majority of the American public out of their public lands.

The following multi-use environmentalist organizations have all voiced their criticisms of the United States Department of Agriculture and United States Forest Service publication in an open letter:

Since then, the media has finally started picking up on the story and exposing the derogatory bias against motorized recreationists.  The Washington Examiner published an editorial that explains the scandal quite clearly.  Live On Dirt, the All-Terrain Vehicle Association, and the American Motorcyclist Association all wrote great summaries in which they included a copy of the open letter.

The reason for the outrage isn't just because of the discrimination against a certain group of legal, responsible recreationists; this guidebook outlines the closure of public rights-of-way for ALL forest users.  Not only will OHV users be banned from driving on forest roads, but also fishermen, mountain bikers, hunters, and anyone who loads up their minivan or Prius with gear for kayaking, picnicking, birdwatching, geocaching, or simply bringing the young, the elderly, or the disabled into the forest for a relaxing afternoon with Mother Nature.

Help us fight these land closures now; if we wait any longer, we'll find that we are ALL locked out of the forest no matter what form of recreation we partake in.


Posted by rubicon4wheeler at 9:37 AM No comments:

Email ThisBlogThis!Share to TwitterShare to FacebookShare to Pinterest
Labels: land use, thoughts

Why 4 Wheeling is my Favorite Sport

I found this video on YouTube and wanted to share it because it so beautifully illustrates to those who have never been 4 wheeling why this is the greatest sport in the world.


I hope this video helps everyone understand why we offroaders work so hard to preserve our natural resources for the public rather than from the public.

What can you do to help?  Why not consider joining one of the numerous pro-access environmental groups.  One of the top organizations leading the fight to keep the anti-access "environmentalists" from successfully closing down our public lands is BlueRibbon Coalition.  If you haven't yet, please consider becoming a member.
Posted by rubicon4wheeler at 2:24 PM No comments:

Email ThisBlogThis!Share to TwitterShare to FacebookShare to Pinterest
Labels: land use, thoughts, videos 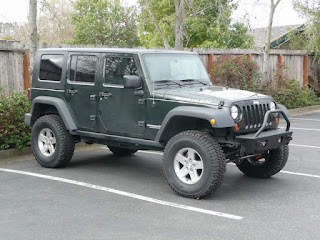 Having finally decided what size tires I wanted to fit on my Jeep, and after much consideration about what type of tire, I finally settled on the 315/70-R17 Treadwright Guard Dog M/T.  Part of my overall decision centered around what wheels I wanted to mount them on, and this became a bigger decision than I anticipated.

Most aftermarket wheels are of significantly lower quality than OEM wheels because a combination of smaller production numbers, tremendous competition, little to no commitment to meeting D.O.T. safety standards, and a majority of buyers valuing bling over performance, has driven production overseas and quality to the ragged edge of acceptable.  There are of course some notable exceptions to this broad generalization, but most of those alternative options are very expensive.

Over the many years I have been building and 4-wheeling a broad variety of vehicles, I have been exposed to many different wheel and tire combinations.  Between my own vehicles and those of my friends and other 4x4 owners I've 'wheeled with on the trails, I have pretty much seen everything out there in real-world use, from street to trail.  My experiences led me to consider the following factors while making my decision: