Jeep Wrangler: Made in America

The Jeep Wrangler is one of the best-selling and highest-content made-in-America vehicles.  According to this story by ABC News (video after the link), the NHTSA reports that the Wrangler is 79% American-sourced content. 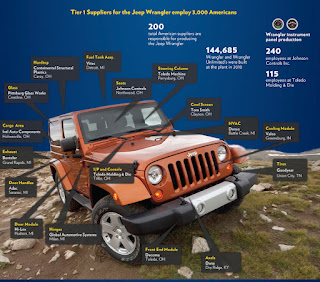 On top of that, every Jeep Wrangler sold around the world is assembled at Jeep's plant in Toledo, Ohio and the company just invested another $1.7 billion into the facility.  FIAT/Chrysler/Jeep CEO Sergio Marchionne is even quoted as saying that it's "unthinkable to assemble a Wrangler somewhere else."

I happen to be a big proponent of buying American whenever possible, so I'm happy to see how American the Jeep Wrangler really is.  One of my top considerations with every aftermarket part I buy for my Jeep is the country in which it's built.  American-made parts are automatically moved to the top of my list of considered options.
Posted by rubicon4wheeler at 11:18 AM