Imagine my surprise to read a news story on Autoblog.com (with video) about a local TV news station reporting on the notorious Jeep "death wobble" shortly after I published a blog post about it.  I'm both frustrated and annoyed because this is nothing more than another instance of a biased reporter's sensationalism misleading the public, disseminating disinformation, and generating hype (and thus, advertising revenue) at the expense of an innocent car manufacturer, their dealerships, and their customer base.

Don't get me wrong; I'm not dismissing the reality of "death wobble."  I have a close friend with a 2008 Jeep Wrangler Unlimited Rubicon who has been dealing with this problem on and off since he bought his Jeep brand-new.  As someone who works in the 4x4 industry, this is an issue with which I'm intimately familiar.  It's a problem that's as common on Jeeps as it is on almost every other 4x4.  And as happens with the dealerships for every other automotive brand, his dealer hasn't been helpful in solving his problem.

Allow me make this perfectly clear: this is not a problem that's exclusive to Jeeps.  We simply hear about it happening more on Jeeps because of three main reasons:

I may be a Jeep owner, but that doesn't mean I'm commenting from a biased standpoint.  Quite to the contrary, I've traditionally been a Toyota and Suzuki owner, but I have sincere appreciation for all offroad-capable 4x4s.  I've personally experienced "death wobble" on my Suzuki Samurais, Suzuki Sidekick and Geo Tracker, a Toyota 4Runner, a Toyota Land Cruiser, and a Steyr-Daimler-Puch Pinzgauer 710M.  For what it's worth, the two Jeeps I've owned (1998 Grand Cherokee and 2010 Jeep Wrangler) have never exhibited "death wobble."

It's interesting that the news reporters are targeting specifically 2005-2010 Jeep Wranglers, because the Wranglers that fall into this year range have completely different steering and suspension parts.  The 1997-2006 Jeep Wrangler TJ uses the same steering setup as the 1984-2001 Jeep Cherokee XJ, 1985-1992 Jeep Comanche MJ, 1987-1995 Jeep Wrangler YJ, 2004-2006 Jeep Wrangler LJ, 1993-1998 Jeep Grand Cherokee ZJ, and 1999-2005 Jeep Grand Cherokee WJ.  The new Jeep Wrangler JK uses an entirely different steering setup from these earlier Jeep models; the new JKs have also used this new "crossover steering" configuration for their full run from 2007-2012 with no significant changes that would make the 2011-2012 models behave any differently from the 2007-2010 models.  It's curious why KGO-TV is picking on the last 2 years of one kind of Jeep and all but the last 2 years of an entirely different kind of Jeep.  Do they not know what they're talking about?

There can be any one single or combination of problems that lead to the steering oscillation known as "death wobble."  It ultimately stems from one root cause: the ability of the front axle to move laterally in relation to the steering.  If you solve this issue, then it is physically impossible for "death wobble" to rear its ugly head.  The problem can usually be masked by increasing steering caster and increasing steering dampening, but a properly tight front-end does not need these "cheater" tactics to resolve "death wobble;"  My 2010 Wrangler Unlimited Rubicon on 35-inch tires drives perfectly smoothly without a steering stabilizer installed.

If you solve this list of the only possible sources of looseness in the suspension and steering, your steering oscillation will be gone:

If all of those components have been checked and confirmed that they are not loose or out of alignment, then you may have a more severe problem in one of the following areas of the chassis:

The installation of a suspension lift kit changes the geometry of the suspension and the steering; the steering alignment must be adjusted to compensate for the new suspension geometry.  Aftermarket wheels are almost always a different width and offset (backspacing) than what the steering was engineered around.  Aftermarket wheels are also rarely hubcentric; lugcentric wheels are much more prone to causing vibrations due to improper centering.  Aftermarket tires are generally much heavier than OEM tires, and certain brands are expected by those of us in the offroad industry to be significantly out-of-round and very unevenly balanced.  Steel wheels are notorious for causing vibrations due to their multipiece construction where the welds can cause runout.  Tires can also get packed with mud or snow, or have their wheel weights knocked off while offroading.

As I mentioned in my previous blog post, Rock Krawler Suspension put together this video showing what sort of wear and looseness can cause the "death wobble":


A trained technician can almost always identify the primary source of the oscillation by eye while an assistant cycles the steering as seen in the video above, but many people have had great success identifying chassis problems by mounting a GoPro or Drift camera to the vehicle's undercarriage and aiming it at the various suspension and steering components to record the oscillation happening in realtime in realworld situations.  Regardless, Jeep should not be held accountable for suspension and steering behavior that results from a vehicle's owner inadequately maintaining or installing nonstandard suspension, steering, wheels, or tires on their vehicle. 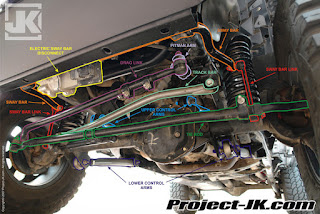 Sensationalism and disinformation such as KGO-TV's news story discredits the reporters and the news agency, takes advantage of the innocent in order to make a buck, and overall is a detriment to society.  It's unfortunate that Consumer Reports Magazine started this tactic several years ago of disparaging car manufacturers for a profit:

It's even more unfortunate that in spite of this type of exploitation having proven repeatedly to backfire over the long term in spite of the short-term financial gains, formerly respectable news agencies such as KGO-TV ABC7 continue to resort to CR's failed tactics.

Hopefully this shitstorm will blow over quickly without too much damage to Jeep's reputation or their customers' vehicles' resale values.  In the meantime, individual Jeep dealerships' service departments need to focus on addressing the root causes of the steering oscillation to make sure they're solving the problem for their customers instead of dismissing the behavior as "normal" or a "design flaw" or "the customer's fault."  Uncooperative dealerships only escalate the problem and continue to feed the trolls.

On top of that, the owners of Jeeps and all other 4x4s who have modified their vehicles' suspension and steering are responsible for fixing the problem themselves - hundreds of Internet forums have threads dedicated to helping people fix this common problem, and any respectable 4x4 shop can help owners pinpoint and resolve the problem.  This post on JKOwners.com is particularly helpful.
Posted by rubicon4wheeler at 12:47 PM